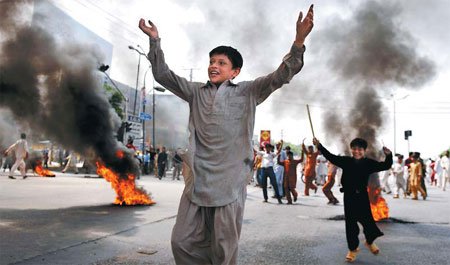 Chitral : In Pakistan, whatever the type of protest be, when given a chance the participants opt to resort to violent actions, looting, tearing down and burning down whatever they can lay their hands on. It does not matter whether the protest is on a religious issue or any other issue. Most participants don’t even care to know for what the protest is . They are only interested in the act of protesting -in venting out their frustration.

Burning and looting and plundering are all manifestations of psychological frustration which keeps brewing within their inner souls due to encountering social injustice all the time and lack of trust in the system.

If a scientific?investigation is carried out on the psychology of mass protests in Pakistan and the element of violence that becomes an inevitable part of these protests, it will be evident that violence mongers for most part do not care about the motive or outcome of the protest but are more interested in the act of the protest itself which they consider a source of venting out their latent anger and antipathy towards the society..? .. CN report, 02 Nov 2018