Paris: President Emmanuel Macron yesterday awarded His Highness the Aga Khan, the Grand Cross of the Legion of Honour (La?Grand-croix?de la L?gion d?honneur),?in recognition of his contribution to humanity and achievements in improving the quality of life of the most vulnerable populations around the world. 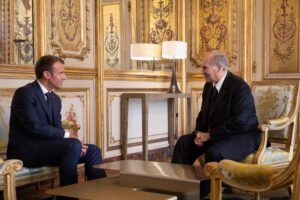 The country?s highest national medal of honour was bestowed upon the Aga Khan at a ceremony at le Quai d?Orsay by France?s Minister for Europe and Foreign Affairs, Jean-Yves Le Drian in commemoration of the Aga Khan?s Diamond Jubilee, commemorating 60 years as Imam (spiritual leader) of the world?s Shia Ismaili Muslim community.

Minister Le Drian congratulated His Highness on his 60 years of commitment and dedication towards the cause of peace, pluralism and development. ?You are Sir, a man true to your commitments, a man of his word and a man of peace. And for all that you have accomplished in your life for our country, and for the stability of the world, France wishes tonight to warmly express its gratitude by elevating you to the dignity of the Grand Cross in the order of the Legion of Honour. Sir, on behalf of the President of the Republic, and by virtue of the powers conferred upon me, we bestow you the dignity of the Grand Cross of the Legion of Honour.? .. sent by Rehmat Uddin, 21 Sep 2018