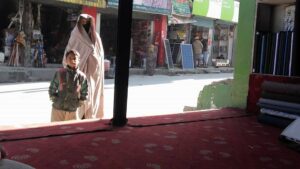 Chitral : Chitral has traditionally been known to be devoid of street beggars and beggary was considered a base occupation by the people. However since some years, beggars from down country have started turning to Chitral given the kind and soft attitude of the people. Such beggars would be found in summers usually but but now you can see beggars in the bazaars in this extreme cold weather. Such beggars, often burqa clad women with young children accompanying them are a visible threat to both the culture and the security of the area. The administration with little effort can turn them back from where they came. Crime is one aspect that can accompany undocumented and leadless people wandering the streets in the garb of beggars .. BH Azad, 26 Jan 2018