Chitral:? The Additional Deputy Commissioner District Chitral Mr. Minhasuddin has said that Water and Sanitation Extension Programme (WASEP) of Aga Khan Planning and Building Service, Pakistan has been accepted as the brand name of quality by the people. He said this while speaking to the beneficiary communities of water pumping urban project in an inauguration ceremony held in Dulumuch yesterday. He said that he had seen the quality work done by WASEP in Booni, when he was posted during the flood disaster in 2010.
He said it was the quality of work of WASEP that its drinking water project not only survived during the disaster but it also helped provide water to the neighboring villages where piped water had been destroyed by the flood. The containers filled with WASEP executed water project were used to provide water to the affected villages caused by flood and earthquake in 2015, he revealed. He appreciated the role and contribution of WASEP which it has made to the development of the area. He said that the biggest contribution of AKPBSP under its component of WASEP was the sensitization of the communities about quality work. He said that after completion of the project, now the responsibility would be on the shoulders of the beneficiary community to maintain it in order to get benefit from it on sustainable basis. 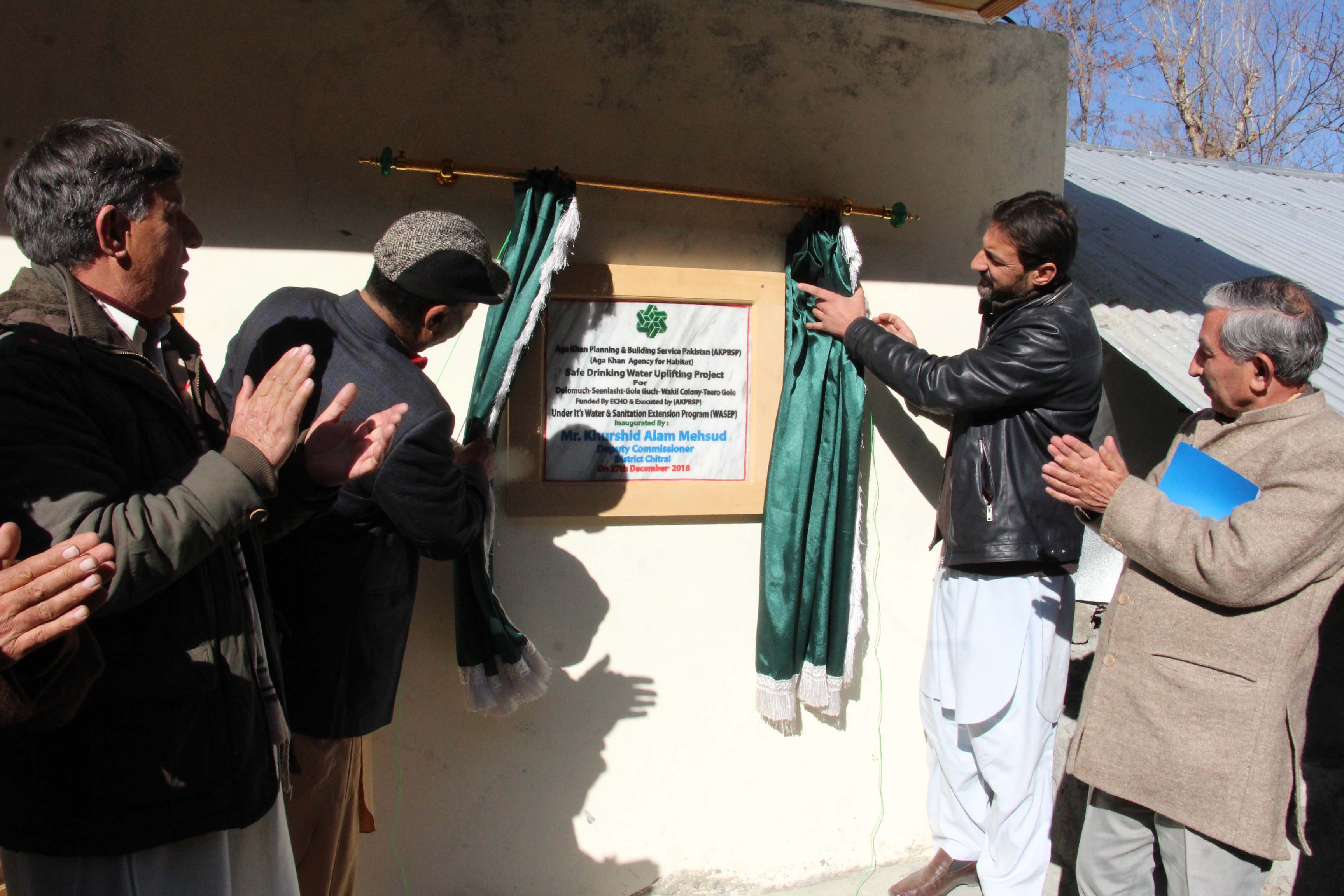 Earlier, ADC inaugurated the drinking water project by removing the cloth from on the board and pressing the button of electrical board for allowing the water to be lifted up. The representatives of cluster of Dulumuch and Seen Lasht, RPM and other staff of AKAH were present on the occasion. After the inauguration, the ADC was taken to the water tank which is situated at 782 feet height, where he was briefed about the project by the engineer Altaf Hussain and Mubarak Sayed.

After visiting the site, ADC was taken to the place where people from beneficiary communities were present. Speaking on the occasion RPM of AKAH, Mr. Muhammad Karam threw light on the work of AKPBSP which it has done over the last two decades particularly in wash sector. RPM said that AKPBSP has provided clean drinking water to 87000 population representing 11000 households in 154 villages across Chitral. He further said that 22 drinking water schemes are going on in Yarkhoon Lasht and Broghol valley which are the remotest and inaccessible villages in Chitral. He informed the gathering that by the end of 2019, the whole Yarkhoon lasht and Broghol valley would be able to have access to clean drinking water project.

Mr. Zohran Shah, the chief representative of Dulumuch and Seen Lasht Cluster briefed about the project by highlighting the process through which the community went and worked with the organization. He appreciated and praised the role of AKPBSP in providing water to the communities who were in dire need of water through urban project. He informed that AKPBSP supported this project as an alternate source of drinking water in case of damage to the already existing project, the source of which is 25 km away and became difficult for the community to maintain it. He acknowledged and thanked Prince Sharif for providing land free of cost for construction of water reservoir for pumping project. He also thanked Prince Sirajul Mulk, Prince Raiz and Prince Amir Hasnat for their contribution to making this project a successful one.

At the end, he thanked AKPBSP for its great role in ensuring the provision of water through uplifting water model in case of disruption in the existing scheme. He also thanked ADC for sparing time to inaugurate the project.
Mr. Liaqat the President of Chinar Society also spoke on the occasion and requested the ADC to help in handing over this project to Public Health Engineering Department for which AKPBSP has already submitted the necessary documents.? .. Shams Tajik?Chitral 28 Dec 2018

CHITRAL: MNA Shahzada Iftikharuddin has claimed that provision of liquefied petroleum gas (LPG) through pipelines to the residents of Chitral will start next month as the federal government has released funds for purchase of land for setting up gas plants.

Talking to mediapersons on telephone from Islamabad here on Tuesday, he said purchase of land for the gas plants was one of the hurdles for want of funds, but now with the provision of much-needed money the plants and machinery would be brought to Chitral from Rawalpindi within two to three weeks.

The MNA said officials of Sui Northern Gas Pipelines Limited had already visited Chitral to select the land for the project.

Highlighting the importance of the project, he said over 15,000 households would get LPG through pipelines with the commissioning of the project at the same rate which a consumer of SNGPL got in Peshawar.

He said as directed by former prime minister Nawaz Sharif it had been decided to provide 67 per cent subsidy to the consumers thus, enabling them to save a large amount spent on buying fuel wood every year.

He said the prime minister would visit Chitral to inaugurate the project.

DRUG PEDDLERS JAILED:?The police have arrested six notorious drug peddlers under 3 MPO and sent them to different jails of the province initially for a period of three months which is extendable at its expiry.

District police officer retired Capt Mansoor Aman told Dawn that the drug pushers were facing criminal cases in different courts of law after having been nabbed by police with drugs. He said they continued with drug peddling soon after their release on bail, posing threat to the society.

Mr Aman said due to the growing public complaints against the drug pushers, the police had no choice but to arrest them.

He said zero tolerance policy was being practiced by the police against the drug peddlers.

BAR ELECTS OFFICE-BEARERS:?Khurshid Hussain Mughal of PML-N defeated Syed Burhan Shah, the joint candidate of PPP and PTI, to become president of the Chitral District Bar Association in its annual polls on Tuesday.