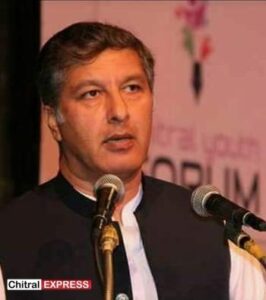 Chitral : Power generation from the 110 Megawatt Golen hydel project has eventually started to provide electricity to Chitral town to begin with and will gradually extend the supply to the whole district. Having being used to deprivation and living on minimums, the Chitralis are overwhelmed with this new found ‘gift’ which they can’t believe they have got it.? An aura of exuberance and jubilation prevailed in Chitral town the whole day, with people congratulating each other.

The Member National Assembly Shahzada Iftikharuddin clearly carried the day as he relentlessly worked towards this moment that will be marked as a milestone in Chitral’s history when the people were introduced to standard, regular electricity like in normal civilized societies around the world. .. CN report, 23 Jan 2018 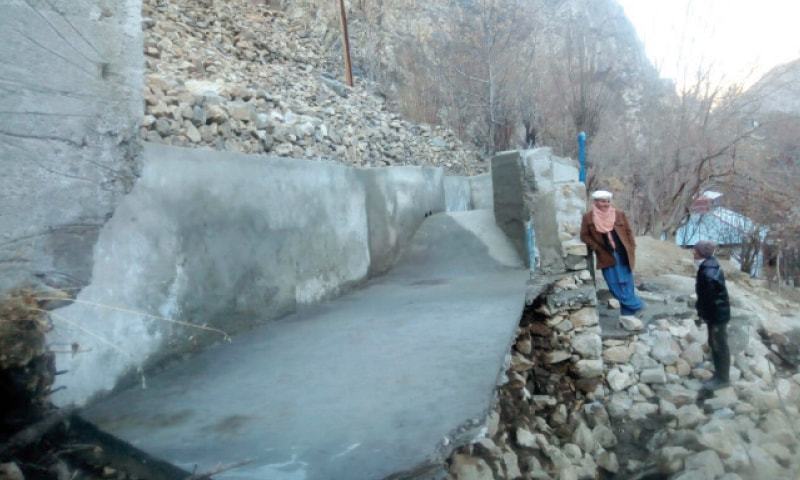 The water tank of the power project in Garam Chashma, Chitral, which collapsed during testing phase.

?CHITRAL; The forebay tank of micro hydro powerhouse in Borbono village of Garam Chashma valley crumbled to the ground like ?house of cards? as it failed to withstand the pressure of water, which was diverted to pass through it during the testing process here on Sunday.

Khosh Mohammad Khan, a member of tehsil council from Lot Koh, told Dawn that the powerhouse was recently completed by Aga Khan Rural Support Programme with the financial assistance of Pakhtunkhwa Energy Development Organisation (Pedo) at a cost of Rs5.66 million. Its inauguration was scheduled for next week.

He said that as elected representative of the area, he had time and again pinpointed the substandard construction of the powerhouse and brought it into the notice of the director of project but to no avail.

Mr Khan said that earlier, the power channel of the project had also failed the test of water and was washed away by water that testified use of substandard material in the structures of both the power channel and the tank.

He said that the collapse of the reinforced concrete cement (RCC) structure due to the pressure of water revealed use of substandard material and faulty execution of the design for which the government should take the contractor to task.

Mr Khan, a member of the ruling PTI, was critical of the provincial government for its failure to implement the Pedo projects in Chitral.

He said that in his constituency, two more power projects of Pedo ? one in Munoor and another in Parabek ? were destined to fail.

Mr Khan said that as per contract, the power projects had already been delayed by more than two years. The local people would have to wait for another year to get electricity as work could be continued in the area in winter.