Alexander Bortnikov, chief of the main Russian intelligence agency FSB, said on a visit to Tajikistan on Tuesday that some 5,000 fighters of an ISIS extremist group affiliate have gathered in areas bordering on former Soviet states in Central Asia, saying that most of them fought alongside ISIS in Syria.

The ISIS affiliate emerged in 2014 and refers to itself as the Khorasan Province, an ancient term for an area that includes parts of Afghanistan, Iran and Central Asia.

It has pledged allegiance to the ISIS in Iraq and Syria but consists mainly of disgruntled former Taliban and other insurgents from South and Central Asia.

Russia has been expressing this concern for several years. Some experts say the Kremlin is exaggerating the number of extremists to justify Russia?s outreach to the Taliban.

In recent years, Russia has emerged as an influential power broker in Afghanistan where it fought a disastrous war in the 1980s.

Russian officials have been mediating between feuding factions, and even spoke for lifting international sanctions against the Taliban.

The Taliban has waged bitter battles against the followers of the Khorasan Province, most often in eastern Nangarhar province but also in the north of Afghanistan.? .. Source 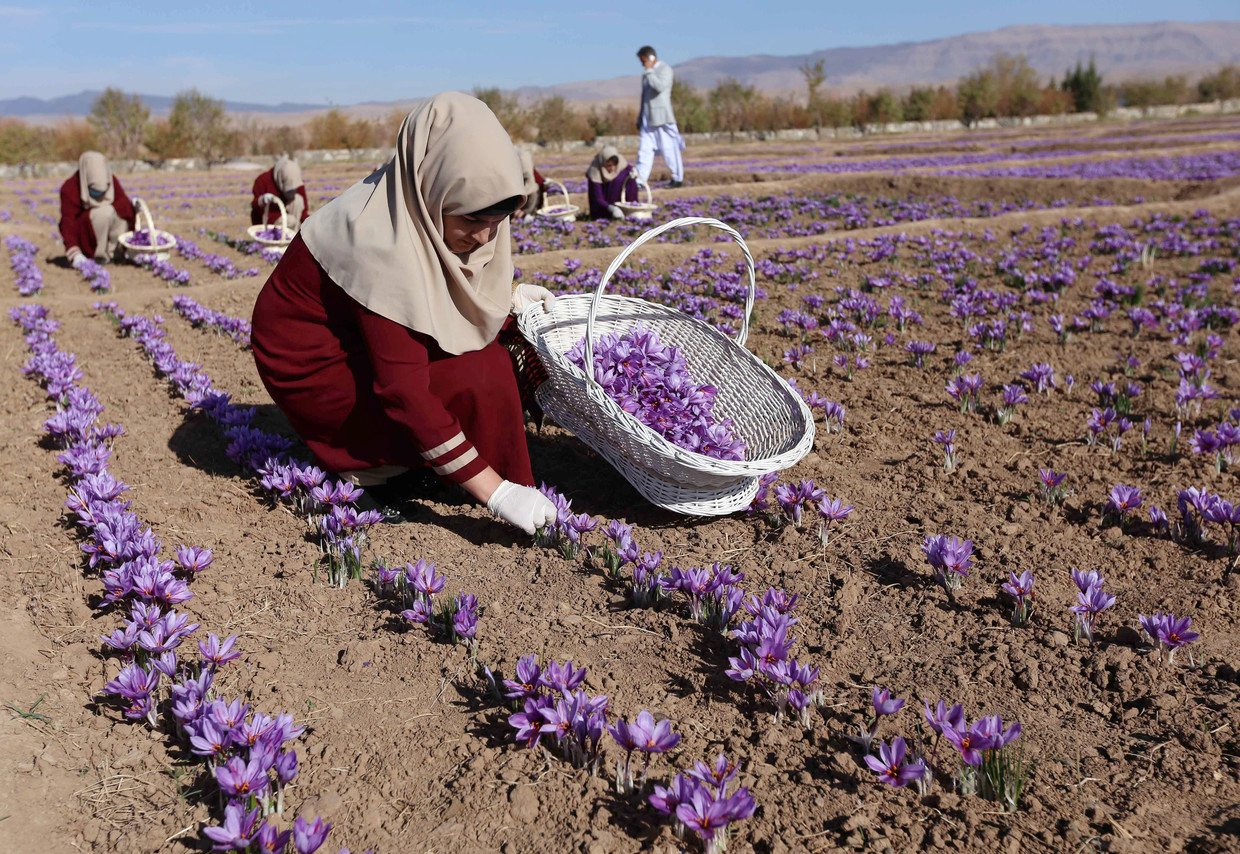 Afghan authorities want to provide farmers with an alternative means of income, other than growing opium, by turning to the world?s most expensive spice.

Saffron production has risen to record levels this year in the country, hitting 13 tons, the Ministry of Agriculture said. Official figures showed that saffron cultivation has increased to 6,200 hectares of land in 2018, up 22 percent on last year.

More than 6,600 saffron workers have been trained on production, processing and packaging of the spice this year, according to the government?s?statement.

?Saffron farmers received some $17 million in revenues by selling saffron crocin and picrocrocin in local markets; considering the fact that some 90 percent of Afghan saffron is being exported to foreign countries,??said the statement.

The delicate pistil of the flower has for centuries been used in various cuisines and in the production of perfumes. Saffron has been dubbed ?red gold? by those who rely on its cultivation. It sells for up to $1,500 per kilogram on Western markets.

?We start our field work before sunrise and each of us can collect about four to five kilograms of saffron flower,??16-year-old Joma Khan who?s one of the 156,000 seasonal workers helping to harvest the spice, told AFP. The workers earn about $1 an hour.

The harvest is then sent to factories where gloved workers remove the red pistil, made up of the three stigma that, when dried, constitute the spice.

The spice is being exported to 17 countries through new air corridors (mainly to China, India, and the Persian Gulf countries), as well as to the European Union and North America, according to the Agriculture Ministry.

Officials are struggling to wean Afghanistan?s farmers off the highly-profitable opium poppy trade. Cultivation of poppy still covers 263,000 hectares in Afghanistan, with nearly 90 percent of the opium harvested on the planet coming from the country. .. Source

Chitral .. National Polio Coordinator Mumtaz Laghari said in Chitral that the possibility of transmission of polio virus from Afghanistan to Chitral cannot be ruled out and immediate steps to check it are needed. He was talking to newsmen at the polio drops administration occasion at the children hospital Chitral. Addl Dty Commissioner Minhasuddin, DHO Dr Iraruddin, EPI coordinator Dr Muhammad Irshad, Dr Tawakal and others were present on the occasion. ADC Minhasuddin talking to newsmen said polio virus detected in Rawalpindi Peshawar Gilgit nad Afghanistan has rendered Chitral vulnerable as people travel frequently to these places and therefore extra care should be taken in this regard .. Muhkamuddin, 21 Nov 2017

Dear Sir,
The stories of miseries and sorrows we see spread around the world today have the finger prints of the United States writ large over them. Whether Iraq, Syria Libya, Sudan, Afghanistan, any where there has been ruthless destruction, America was there to ‘liberate’ that country of a dictator or see the ‘victory’ of religious forces.

What kind of country is this US? Why can’t it mind it’s own business? The soviet union was a good sentry to check the despotic designs of the US, but shrewd propaganda and religion manipulated tactics of the CIA caused it to capitulate eventually.  Ever since, increasing stories of American hegemonic aggression are being witnessed by the world day and night.

Over the years the US has become so bold that with dictates like “Either you are with us or you are against us” it has brought feeble countries like Pakistan on their knees within no time.

The Americans with their intelligence arm the CIA are experts in using religious sentiments to create unrest in the world and know well to exploit religious weaknesses of societies.

Is there a way that we can get to stop America causing misery to the world?  Is there a way to prevent all these unnecessary sponsored killings and devastation?

May be China and Russia can get together to cut the US down to size,  make it stay in it’s own shoes and spare the world ruthless destruction, from now on, at least. — Ehteram ul Haq, Chitral, 21 Aug 2016.