Isn’t it a pity that Pakistanis have lost trust in everything, from the government to politicians to businessmen to doctors to religious preachers to even each other.

Once upon a time we would confidently buy mince meat from the butcher trusting him to deliver the right stuff. Now not only are we skeptic that he would have minced ‘something’ with the mince, but also that the meat is of the proper animal!? When we buy any foodstuff from the markets we are worried about it’s purity. We only want to buy solid spices and grind them ourselves instead of buying ground spices. When we go to buy medicines we only approach a couple of well reputed pharmacists discarding rest of the 98 percent due to lack of general trust. When we want to rent out our property we ask for unduly hefty security money as well as advance rent taking for granted that the tenant will create problem at some stage. Why all this distrust? Why this decay in the moral fiber of Pakistanis? 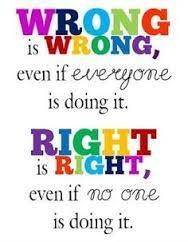 The reason that promptly comes to mind is that 98 percent Pakistanis are Muslims and so look towards religious preachers for moral guidance. Our religious preachers do no preach moral values (except stressing on avoidance of alcohol, fornication and merry making). In fact religious preachers continuously and vociferously stress upon the attribute of kindness of Allah Almighty in forgiving sins and give out short cut formulae for the deletion of sins, like reciting such and such verse from the Holy Quran or performing such and such ritual will delete thousands of sins at once.

Because of this impression drilled into the minds of Muslims, they do not bother to avoid sins but are more concerned about rituals that would delete their sins after having committed them deliberately.? If only our religious preachers preach that Allah Almighty shall not forgive sins committed against human beings (huqooq ul Ibaad) and the sins they mention of being pardonable are sins towards the rights of Allah Almighty Himself,? everything else will fall in place properly.

If a religious preacher says that on reciting Durood Sharif once, the supervisor angel sitting on a person’s shoulder will not register his/her sins for three days,? then naturally the person will conclude that he can continue committing sins and recite Durood Sharif after every three days to get those sins washed out regularly. In such a situation which is prevailing in Pakistan, how and why should the person abstain from sins?

To raise our country out of the moral abyss it has plunged into, the ULTIMATE CAMPAIGN should be launched through mosques, tableeghi gatherings, television, social media and news papers that the Ghafoor and Raheem (forgiving and Kind) attributes of Allah Almighty are only applicable for sins against his own rights (Huqooq Allah ) and do not apply to sins against humanity as? Allah Almighty Himself clearly says in the Holy Quran that He shall not forgive sins against human beings. .. Chitral News Editorial, 11 Dec 2017