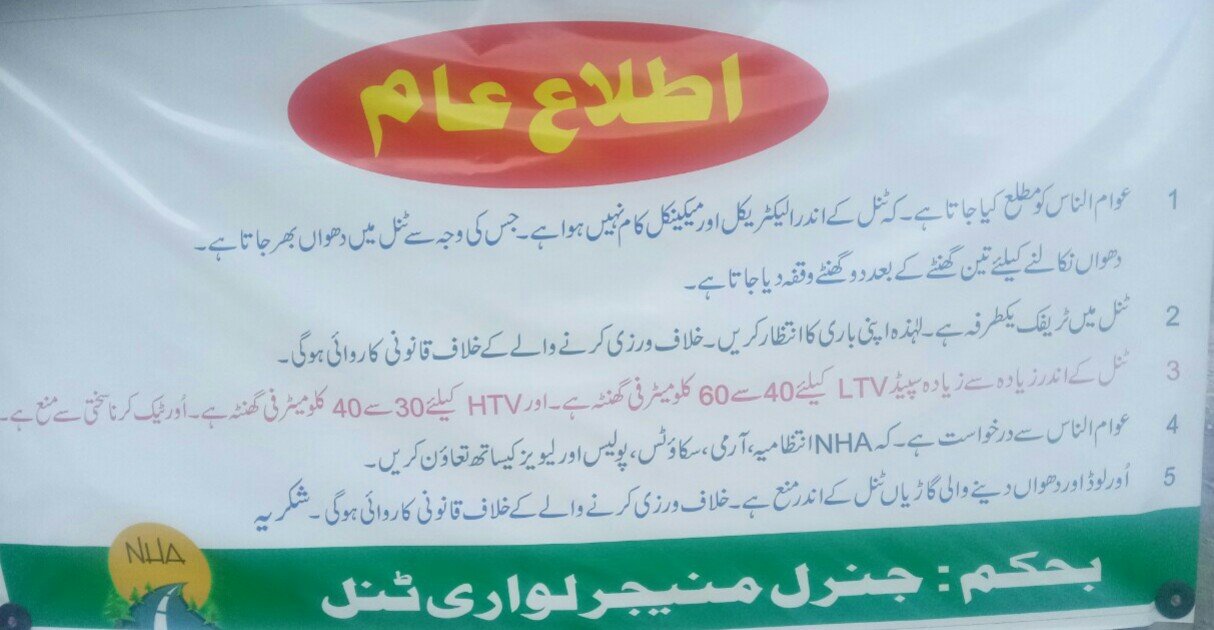 Chitral: The nuisance called Lowari tunnel seems to have no end. The NHA has hung a rather funny banner at the tunnel spelling out the rules for travelers. At the very look of the banner it appears to be a warning for dangerous criminals trying to enter a nuclear station rather than addressing hard pressed individuals wanting to commute in a normal way in their country. It also appears as if non completion of electric works is fault of the travelers. Specially, the ‘qanooni karwai hogi’ is a slap on the face of every conscientious traveler, as if people travel all the way to the tunnel to get prosecuted.

The banner displays flimsy excuse of closing the tunnel for two hours after every three hours to clear the smoke inside. The fact is that there is no smoke inside and the little that hangs in is because vehicles are held up at the mouth and only let in in convoys which obviously will create smoke even in the most modern tunnels. If vehicles are allowed to cross as they approach without being stopped and both way traffic is utilized as the tunnel is designed for it and fit for, there will be no smoke inside it. This is simple common sense and no rocket science involved in it. Absence of ventilation system is just no problem with the present density of traffic. Maybe it will be required after five years.

Because of the spinelessness of the Chitrali leaders and followers, the NHA all these years has been treating Chitralis as sub-humans who don’t have common sense and who cannot sacrifice for their rights and take everything lying low. .. CN report, 01 Dec 2018