Chitral : According to a new schedule released by the NHA, the lowari tunnel would be open for only eight hours a day in two shifts of 4 hours each, while for the rest sixteen hours it would remain closed for all kind of traffic. It has been called ‘winter schedule’.

This makes the Lowari Tunnel a unique tunnel in the world which has a ‘schedule of operation’. If the excuse is of it not being completed, then that makes it yet more unique, as a tunnel being incomplete even after seven months of it’s inauguration by a Prime Minister of the country. 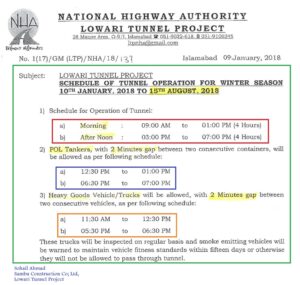